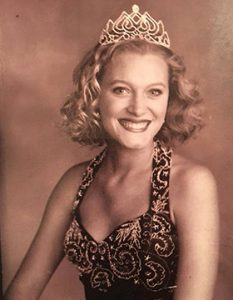 Wendy Vanderpool Holsman was crowned the Wabash County Festivals Queen in July, 1998 and went on to compete in the Miss Indiana State Festivals Pageant  in November, 1998 where she won the title 1999 Miss Indiana Festivals Queen.  During her reign she traveled over 3,000 miles in Indiana.  Wendy graduated from Anderson University and is a music teacher at Riverside Intermediate School, Hamilton Southeastern School Corporation.  She was named teacher of the year in 2009.  Wendy is married to Toby Holsman.  They live in Fishers, Indiana with their two daughters, Kaia and Lily.  Wendy was initiated in the Wabash Chapter in 1995 and was also active in the Fishers Chapter.