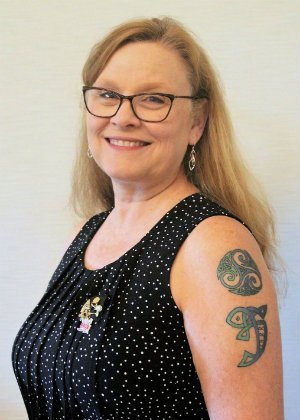 Assistant Editor of Cross Keys - Shannon Dawson pledged Knightstown Alpha Zeta in 2001. She has served as Chapter President and Vice President. At the state level, she has served as Province IV Officer under Council President, Kathryn Dory, and then joined her 11 PO sisters the following biennium as a Chapters and Charters Committee Representative for Province IV. She recently finished her term as the Mental Health Chair. Professionally, Shannon has been a television producer since 1986, currently producing documentary materials with WFYI and acting as the broadcast producer for the Indiana Debate Commission. In 2018, she also became the Director of Public Relations for Indianapolis Classical Schools, the umbrella organization of Herron High School and Riverside High School.