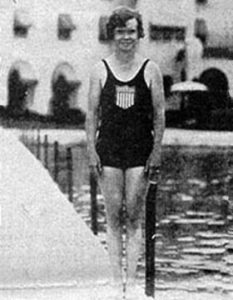 A former swimming and diving champ and a member of the United States Olympic team of 1924, Fraze Donnelly Bungard was from the Warsaw Alpha Lambda chapter.  At one time, she held most of the free style records for Indiana and Kentucky and was diving champ of the two states.  She was on the 400 meter relay team along with Johnny Weismuller, Gertrude Ederle, and Duke Kananamoku, which set both Olympic and world records at the 1924 games in Paris.  In Dublin she won second place in the preliminary high dive and 200 meter race, and won the 100 meter freestyle event in the games.  In 1928, Fraze swam 9 miles up the Maumee River “just for the fun of it” and won $250 from the Toledo Blade, who sponsored the deal.