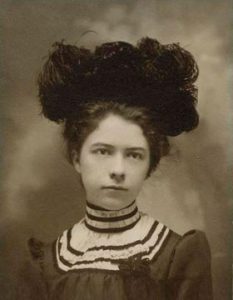 FRANCES GOLDEN (September 7, 1877-June 24, 1963) was not only a Charter Member of Beta Chapter of Tri Kappa, formed in 1901, but also a Charter Member of the New Harmony Associate Chapter formed in August of 1949.  Miss Golden began her acting career at the age of one, appearing on stage in New York in Woman of the People.  Her parents, Martin and Bella Golden, were of the professional thespians known as The Golden Troupe.  Frances was born in New Harmony and traveled with her parents’ theatrical company, appearing as Little Fanny and Meg in stage plays.  She graduated from New Harmony High School in 1895 with honors.  She went to New York to study Opera and Dramatic Arts.  She performed in New York and Chicago, joining a vaudeville circuit of Barr and Lancaster preceding World War I, and toured throughout the United States and the countries of Scotland, England, France, and Germany.  Upon retiring from the stage, she opened the Baird School of Music in Middletown, New York. Moving back to Indiana in 1920, she taught music at Evansville College (now University of Evansville).  In Evansville, IN, she opened the Golden Studio of Voice and helped organize the Community Players of Evansville (now Civic Theatre).  Frances joined the Infinite Chapter in June of 1963.  Submitted by: New Harmony Associate Chapter