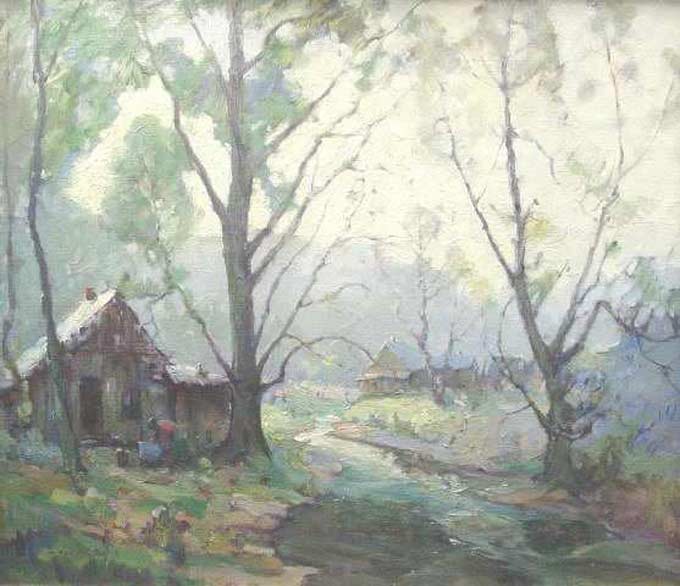 “Early Monday Morning” by C. Curry Bohn was the tenth painting chosen for restoration. This painting, measuring 26”x30” was purchased in 1934 for $250 and its current value is $15,000. It depicts an autumn landscape with cottages flanking a stream and a woman washing clothes in a large pail outside a cottage.

C. Curry Bohn wrote of this painting, “the problem of the landscape painter is not to paint the subject as it is in Nature but to interpret his emotion of the subject. I have found in the elements of this composition a mood of Nature that has always impressed me. Early morning light, delicate foliage of spring, silvery gray lights of the morning dew—with such elements I have tried to create a poem in subtle grays. People of the soil awake with the coming of light. I have used the figure of the washerwoman only as a suggestion of life and as a touch of color, the only pure color in the canvas.”

C. Curry Bohn was born in Nashville, Tennessee, October 19, 1894. His father was an artist doing much of the decorative work for the Mardi Gras in New Orleans in his late life. As a youth, Curry Bohn spent his days in school and learning the trade of printing in Louisville, Kentucky. As a young man, while serving as a foreman in a large printing firm in Chicago.  Mr. Bohn spent his spare time as a student and artist and was even then winning awards for his artistic efforts.

He was a member of the Pallet and Chisel Club and the Chicago Photo Society. His many interests included painting in oil, water color, monaprints, etching, and photography. He studied at the National Academy and Art Institute of Chicago and received his greatest inspiration from Edward F. Timmons, a painter of landscapes. About 1921 he made his first trip to Brown County on a vacation and found there the variety for his many expressions of art. In 1932 he purchased an old farm about two miles north of Nashville in Brown County making this his unusual studio-home.

Back to Culture Page
« The Peonies
Enid Lemstra »
MAIN MENU