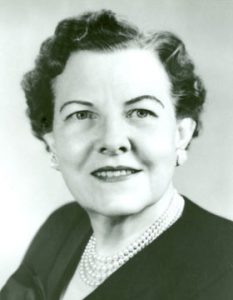 Cecil Murray Harden rose through the ranks of the Republican Party in Indiana and nationally before winning her first campaign for elective office to the House of Representatives. Harden eventually served five terms, making her one of the longest serving women at the time of her retirement in 1959.

Cecil Murray was born November 21, 1894, in Covington, Indiana, daughter of Timothy J. Murray, a real estate broker and longtime local Democratic leader, and Jennie Clotfelter Murray. She attended public schools in Covington and entered Indiana University. Later that year she left to teach school in Troy Township, Indiana, and in the public schools in Covington. On December 22, 1914, she married Frost Revere Harden, who eventually became a Covington automobile dealer. They had one son, Murray.  She was initiated into the Alpha Gamma Chapter of Tri Kappa on September 2, 1926.

When Harden was sworn in as a Freshman Representative in January 1949, she was appointed to the Veterans’ Affairs Committee. She transferred to the Committee on Expenditures in Executive Departments (later Government Operations) in the following term and served on the Committee on the Post Office and Civil Service in the 83rd through the 85th Congresses (1953–1959). In the 83rd Congress, while the GOP briefly held the majority, Harden chaired the Inter–Governmental Relations subcommittee of Government Operations.

Two months after leaving office in January 1959, Harden was appointed special assistant for women’s affairs to Postmaster General Arthur E. Summerfield and served until March 1961. In August 1970 President Richard M. Nixon appointed her to the National Advisory Committee for the White House Conference on Aging. Afterward, she retired to her home in Covington. Cecil Harden died on December 5, 1984 in a nursing home in Lafayette, Indiana.