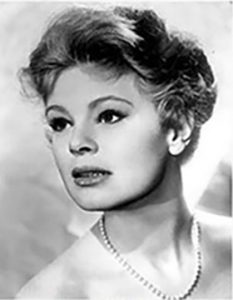 1926 in East Chicago, Indiana.  A member of the East Chicago Beta Sigma chapter, she graduated from the Goodman School of Drama at DePaul University where she studied theater.  Palmer got her start in TV working for nothing describing lingerie modelled on the Art Jarrett show.  Her first acting job came in 1951 when she joined the cast of weekday soap opera Miss Susan. She quickly became known as a regular supporting movie and Broadway actress and as a panelist on the game show I’ve Got a Secret. She held major parts in TV shows such as Queen Bee, The Web, Omnibus, Studio One, Mister Roberts, and as Kitty Carter in The Long Gray Line. Later she played Jason Voorhees’ mother, Pamela Voorhees, in the popular slasher film Friday the 13th.  Along with appearances on Knots Landing and The Love Boat, she created the role of “Suzanne Becker” in 1982 on the CBS soap opera As the World Turns. Betsy died of natural causes on May 29, 2015.