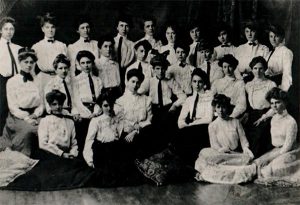 Tri Kappa was formed by several ladies attending the Girls’ Classical School founded by May Wright Sewall in Indianapolis.  This secondary school included the first two years of college level education.  The young ladies decided it might be fun to form a “secret” organization, to have a few social times together, officers, dues, a password, and a few rules.

Of the original eight members, only Beryl Showers of Bloomington returned to school the following fall. Beryl decided to revive the organization and selected her best friend, Erma Ribeyre; her roommate, Mary Sanders; and four other friends, Bertha Matthews, Gertrude Zumpe, Lulu Baer, and Frances Roberts. These seven young ladies are considered the founders of Tri Kappa. They met in Beryl's room on February 22, 1901, and formally organized. Officers were elected and they wrote a constitution avowing their purpose to be charity and kindness. The original pin later became the Council pin. To ensure Tri Kappa would continue beyond their school days, each member was to start a chapter in her hometown.

NOTE: There has always been some discussion concerning the relationship between our organization and another well-known organization that has the same initials. Our Council would like to assure the public that we are in no way associated with any other group that coincidentally happens to share our initials. Our purpose has been and remains charity and kindness.

As the original founders planned, Beryl Showers and Bertha Matthews started the first chapter, Alpha in Bloomington, when they returned home from Girls Classical School….

The second Tri Kappa chapter was founded quickly after the first chapter. Erma Ribeyre and six others organized the Beta Chapter in New Harmony. It…

There were a total of seven chapters and the first convention was held in the old Opera House in Bloomington. At the time of the…

The scholarship assessment was raised to $10 and Charlotte Briggs from Columbia City received the second scholarship for a full year at Indiana University. Thus,…

The Hoosier Art Salon was founded and Tri Kappa presented a prize at the first meeting in Chicago.  Picture shown is the Third Annual Tri Kappa…

The Tri Kappa Art Collection was a traveling exhibit from 1932 to 1955, but because of the wear and tear on the canvases, Tri Kappa…

The Tri Kappa Memorial Fund was started to grant money to colleges and universities in Indiana to establish emergency funds for students.  In 2017-2019 funds…

Due to the wear and tear on the art collection from moving around the state, the paintings were moved to Rose-Hulman Institute of Technology for…

The scholarship endowment fund was established as a way for loyal Tri Kappas to give gifts and special funds to the organization. Our 46th Council…

The Key Scholarship was established for the non-traditional student. The focus of this scholarship was the student working on his or her first undergraduate degree…